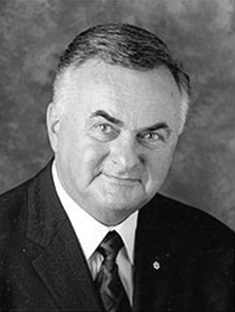 “Our commitment is to support the arts community in recognition of the vital role artists play in expressing our national identity. We seek to enrich the legacy of Canadian art by directly aiding exceptionally gifted individuals working in all disciplines - duly reflecting Canada’s linguistic and cultural diversity - while heightening public awareness of the role of private benefactors in nurturing talent and strengthening the bonds which unite us as a nation.”

The Hnatyshyn Foundation is a private charity established by the late Right Honourable Ramon John Hnatyshyn, Canada’s twenty-fourth Governor General, to assist emerging and established artists in all disciplines with their schooling, training and career development, and promote to the Canadian public the importance of the arts in our society. Its programs are funded by donations from government, foundations, corporations and individuals.

The Foundation began awarding grants to developing artists in the performing arts in 2005 and has since expanded its programming to include awards and residencies for emerging and mid-career artists and curators working in the visual arts.

The Hnatyshyn Mandate at Rideau Hall

The years between 1990 and 1995, during which the late Ramon John Hnatyshyn and Gerda Hnatyshyn served in vice-regal capacities for Canada, are associated in particular with initiatives at Government House emphasizing support for the arts and fostering heritage awareness. The inauguration of the Governor General’s Performing Arts Awards, conferred annually since 1992 to recognize extraordinary lifetime achievements, have provided an unprecedented means to enhance awareness of Canadian accomplishments in this field. Both the awards presentation ceremony at Rideau Hall, and the Gala performance staged at the National Arts Centre, have become the highlight of the season.

The Ramon John Hnatyshyn Award for Voluntarism in the Arts is presented each year on this truly national occasion.

Canadians and visitors from around the globe drawn to our National Capital Region each summer have made the Governor General’s Summer Concert Series, launched to showcase Canadian talent in performance on the grounds of Rideau Hall, an overwhelming popular success.

To further encourage public appreciation of the historic official residence of the Governor General, Friends of Rideau Hall was formed to augment restoration work undertaken by public agencies, and to publish a pictorial record of these endeavours in the volume Rideau Hall: Canada’s Living Heritage (1994).

On the occasion of the 125th anniversary of Confederation in 1992, the assistance of the Canadian Association of Landscape Architects was enlisted to organize a national competition for the design of a rose garden at Rideau Hall. Through the efforts of the Canadian Heritage Garden Foundation, realization of this unique floral legacy was funded by the generous contributions of individuals, groups and business concerns from across the country.