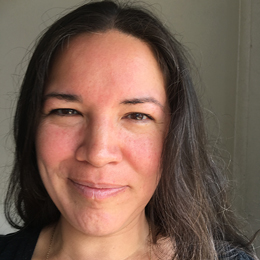 Maria Hupfield is an interdisciplinary artist and member of the Anishinaabek Nation from Wasauksing First Nation, Ontario. Her hand-sewn industrial felt creations are multidimensional; further activated in live performance and video they function as radical forms of collaboration, craft and Indigenous futurity. Her first major traveling solo exhibition The One Who Keeps on Giving, was mounted by The Power Plant Museum of Contemporary Art, Toronto; in partnership with Southern Alberta Art Gallery, Lethbridge; Galerie de l'UQAM, Montréal; Mount Saint Vincent University Art Gallery, Halifax; and Canadian Cultural Centre, Paris. A recipient of the Grafly Commission, The Ulrich Museum will mount a solo exhibition in spring 2019. Her work has travelled with Beat Nation: Art, Hip Hop and Aboriginal Culture, and shown in New York at The Kitchen, Brooklyn Information & Culture (BRIC), The Bronx Museum, The Smithsonian National Museum of the American Indian, The Museum of Arts and Design, and SITE Santa Fe, with performances at Gibney Dance, Boston Museum of Fine Arts, and The Brooklyn Museum. She is co-owner of Native Art Department International with Jason Lujan and is currently the Indigenous Artist in Resident, International Studio Curatorial Program ISCP in New York. Hupfield is the recently appointed Professor of Indigenous Media and Performance at The University of Toronto, 2019. Hupfield is represented by Galerie Hugues Charbonneau in Montreal.

Daina Warren is a member of the Akamihk Montana First Nation in Maskwacis, Alberta. She received her Bachelor’s degree in 2003, graduating from the Emily Carr University of Art and Design. Warren also graduated from a Masters in Art History program, completing the Critical and Curatorial Studies from the University of British Columbia (2012). In 2000, she was awarded Canada Council's Assistance to Aboriginal Curators for Residencies in the Visual Arts program to work with grunt gallery in Vancouver. This opportunity led to a permanent position with the artist-run centre as an associate curator and administrator until 2009. Warren then went on to complete another Canada Council's Aboriginal Curatorial Residency this time with the major arts institution, the National Gallery of Canada in Ottawa, Ontario. During this residency she curated the group exhibition Don't Stop Me Now. Other exhibitions of note include the online exhibitions If These Walls Could Talk and Contains Animal Byproducts! created for the CODE Screen 2010 Vancouver Olympics project. Warren was awarded the 2015 Emily Award from Emily Carr University and was selected as one of six Indigenous women curators as part of the Canada Council for the Arts Delegation to participate in the International First Nations Curators Exchange that took place in Australia (2015), New Zealand (2016), and Canada (2017). She is currently the Director of Urban Shaman Contemporary Aboriginal Art in Winnipeg, Manitoba.